The West often evokes the rights of man, the citizen, the
refugee, the child, the invalid, etc., but within these even
technologically advanced countries there are areas and spaces  that are ignored and without jurisdictional protection. When  the majority of the countries of the world claim to have  adhered to this universal charter, they are convinced of the  nullity of its scope and utility.
the hungry, illiterate third world populated largely by
homeless, nomadic, illiterate, misinformed can not
to claim or hope for these rights.
What right can be claimed by the waves of emigrants that break  every day on the Canary Islands (more than three hundred  and the double on the Italian coast and the Moroccan cities  under Spanish domination). When you sell your baby to a
derisory price (less than a dollar), or his dignity against a
piece of bread, to ridicule himself or put his body to the
disposal of a foreign tourist looking for exoticism, when we
have never known the taste of lemon, butter, honey, apples,
when we see his children dissolve in front of
him for lack of food, his animals transform themselves
in bone by drought? .. we can not think to have
rights or even homework? When hunger sets in,
the country becomes invisible, nonexistent, and its leaders
which, in principle, have several nationalities and
accounts well stocked? .In 1967-1969 a blockade encouraged
by African and European countries provoked a million
deaths in Biafra and the disappearance of that country
profit from another? .Fourty thousand children die
every morning in the world because of malnutrition
while the French destroy hundreds of tons
fruit and food products in order to maintain
high prices. Elsewhere, millions of sheep are
sacrificed in a day at the time, hundreds of
billions are spent on unnecessary armaments
and in the special search? And, at the same time,
thousands of people are taking the path of
illegal emigration every morning and throw themselves into
sea ??leaving thousands of victims and dozens of
thousands of orphans ??
In Morocco, dozens of senior executives are in prison and
their property seized, they embezzled trillions of billions 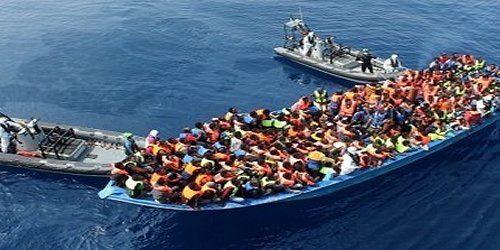 in record time, fortunately that kingdom
has strong resources to put its citizens
free from hunger and injustice, but this is not the case
elsewhere?. One people, America has
a quarter of the wealth of the entire planet and is active
to absorb more, other peoples are stateless, the case of
Palestinians, Kurds, others have totally
faded away?. There are also citizens of countries who
are without nationality, case of “bidoun = without” as
the nomads of Kuwait. The citizen of the wealthy countries
does not recognizes that his rights are similar. Under the influence of
the industrial revolution and the losses of the labor force
by the effects of war, aid to countries
developed to encourage their citizens to emigrate, one
authorize the flow of aliens to be exploited,
once the activity has decreased, we suspend
entries, we are tightening our visas, we are drawing up
quotas and we throw those already in place as a
vulgar kleenex paper. So, there are countries where
foreigners are four times higher than citizens
this leads to the loss of identity, race and dignity.
Twenty-two million refugees camp in poor countries because
they can not live at home or bereceived elsewhere. In the
middle of the 19th century, the population
of Ireland has been decimated by famine because the disease
of the potato, important element in the base
of their diet has caused the death of a million
of humans and the same number of emigrants.
Westerners ignore the effect of thirst, hunger,
abuse that illegal immigrants suffer, they
cross several countries, several deserts, leaving
in each of them a part of their health, of their
human dignity. When the dollars are exhausted
pay by the flesh? .que African women
unable to provide for bread any longer
found pregnant, with a child raped by
border guards? .to finally reach the level
of the last obstacle that separates it from life
face with the soldiers of the world of justice
to the point, shooting at these miserable creatures
killing at close range – in the name of human rights.
Elsewhere, a universal court is established to try
a dozen men? who failed in their duty
towards the powers? .to those who claim
defend legitimate rights. These same vigilantes
denied the Lebanese citizens the right to exist,
They had to wait another week …
to clean the ground? .. When we shoot the people
from Israel 300 katyusha? s and one kills only one citizen?
it’s illegal, but when stung by a bee
we must not burn the farm or the whole village.
Nobody should talk here about success .. trophy fun
massacre, ruins , destruction
Elsewhere we continue to dance, to sing,
to applaud for having succeeded in putting pressure on
country to adhere to the charter of rights.